Here you can find explanations about the most difficult Russian characters and the sounds they mean.
\

The explanations are provided with audio-materials to practice.
\

But let’s start from some theory. I hope it would be useful, but if it’s not interesting to you, you can skip it and move to the explanations about sounds and characters directly.
\
\
WHAT’S YOUR FIRST SMART GOAL IN LEARNING A NEW LANGUAGE? 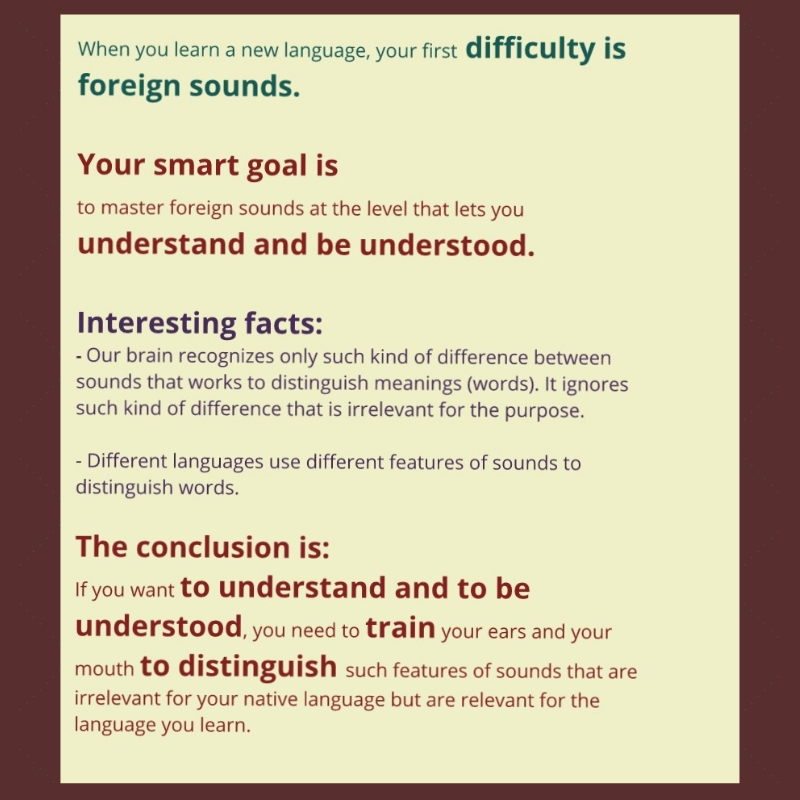 When you start to learn a new language, the first difficulty you meet with is a foreign phonetics. Your teacher asks you to make some strange sounds.

- It’s crazy! Why can’t I just speak like normal people do?
Or maybe you say:
- I want to speak like native speakers do – without any foreign accent!
But it’s so hard at the beginning that many people thinking like that, just give up and stop learning at all.

And what goal is smart then? – Your first smart goal is to master foreign sounds at the level that lets you to understand and be understood.

Now I want to tell you something very theoretical, but I hope that it will clarify this idea for you.

What is a “sound”? I’m sorry for a strange question. But the feature is that a “sound” in linguistics and a “sound” in acoustics isn’t the same thing.

From the point of view of acoustics, there are no 2 similar sounds in nature. For example, if you say “A” 10 times in a row, acoustically, you’ll get 10 different sounds. They can be different in loudness, length, intonation… And ask your spouse or your child to say “A” – the difference will be even more evident. But, you see? – our brain ignores it. It thinks it’s the same sound! Why? It’s because none of these differences works to differentiate meanings (words).

Now, the next feature is that different languages use different acoustical characteristics of sounds to distinguish words. What is irrelevant in one language can be relevant in another one. And this is the source of head ache for language learners.

The mechanism of recognition of acoustically different sounds as the same “language sound” is formed in your early childhood. It’s based on what is relevant and what’s irrelevant in your native language. Then, when adult, you start to learn Russian. And you meet with some very strange sounds. Ш – Щ, for instance.

But a teacher shows you 2 different Cyrillic characters and tries to convince you that some difference still exists. You listen again and again and you feel like it’s hopeless:

The truth is that these sounds are different – but your brain does ignore this difference! And it happens becuase this kind of acoustical difference is not essential for your native language! When you speak your language, sometimes you can pronounce something very close to “Ш” (like “sh” in “shelf”). Sometimes you can say something really close to “Щ” (like “sh” in “Danish charter”). And you never pay attention to the difference becouse it doesn’t work to distinguish meanings – in your language. But in Russian it does work! “ШИТ – ЩИТ”, “ШОК – ЩЁК [ЩОК]“, “КУШ – КУЩ” are different words. And that’s why “Russian ears” hear this difference very clearly!

Let’s resume it about your first smart goal in learning a language. It’s the goal to understand and to be understood. You need to train your ears and your mouth to distinguish such features of sounds that are irrelevant in your native language but are essential in the language you learn. Otherwise you won’t be able to understand and be understood.

\
\
\
HOW CAN YOU ACHIEVE THE GOAL TO UNDERSTAND AND TO BE UNDERSTOOD? 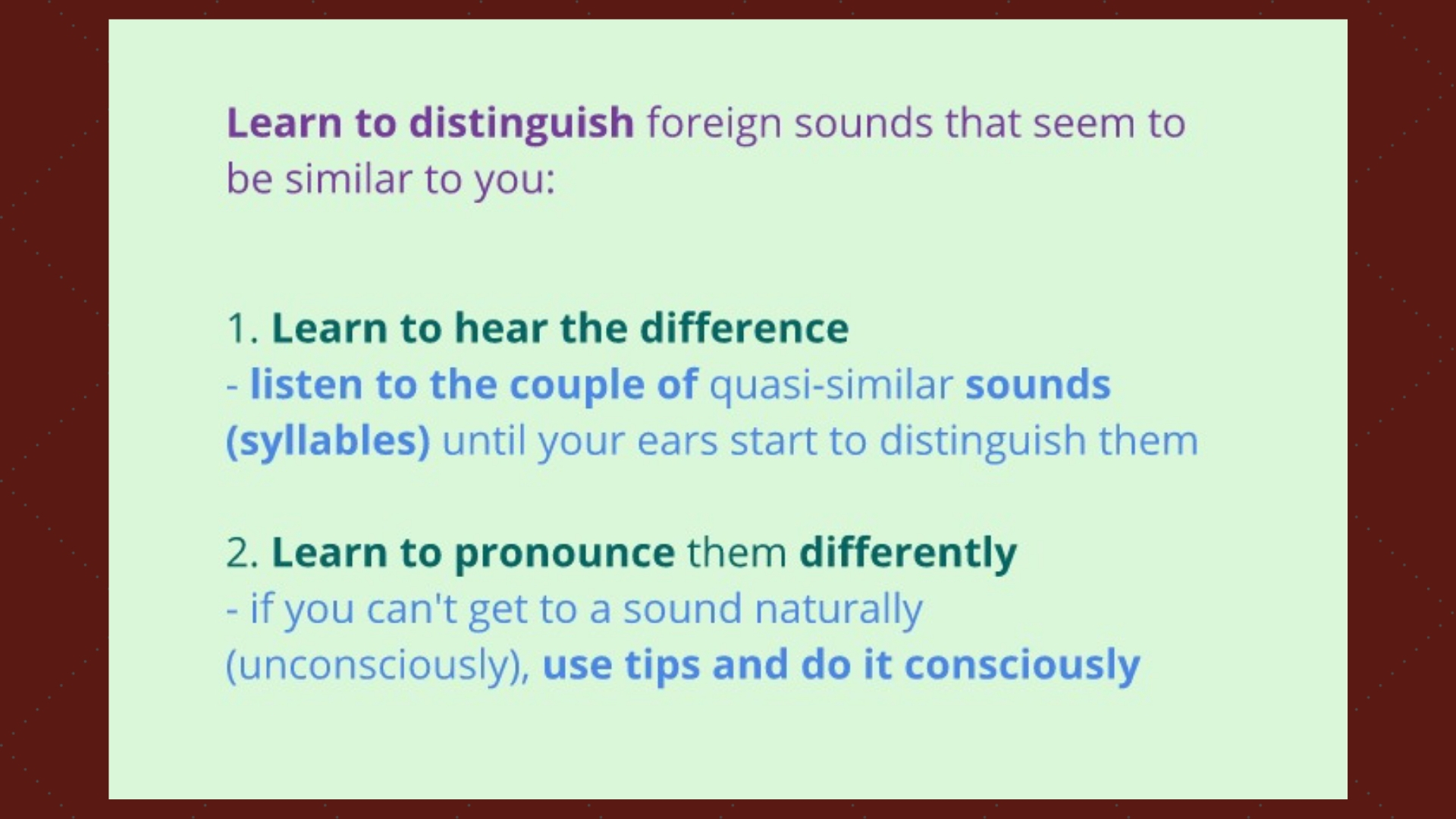 \
To achieve this goal you need to train your ears (to increase your listening competence) and your mouth (articulation).
\
But maybe it sound too abstract for some of you.
\
- What does it mean exactly – “to train my ears and mouth”? How can I do it practically?
\
Let me instruct you about it.
\
1. Listening competence is the thing number one. To train it you can listen to the couple of foreign sounds that you find difficult to distinguish. If it’s consonants, it makes sense to listen to syllables.

There are some other excercises to practice, but they require a teacher’s presence and feedback. While this technic is something you can do by yourself. The only thing you need is an appropriate audiofile to work with. It’s not easy to find one in the Internet, but I’ll provide you with some audio here.

While you’re listening, your ears are getting used to these sounds and little by little you start to hear a difference.

2. Work with your articulation. If you can’t get to a particular sound naturally, you need some tips – what to do with your tongue, lips etc. to get to it.

May be you don’t feel very enthusiastc about this information. I know – some people can hardly understand where their tongue is and what it’s doing. But I have a good collection of hints that work even for people like that. I’ll share it with you here!

What Russian sounds seem to be difficult to you, it dependes on your native language. But here I’m going to explain some sounds and characters that are difficult for all the foreigners.

You’ve just started to learn Russian. From zero. If you work with a professional teacher, the first Russian sounds you meet with are A, О, У… Let me stop for a moment and emphasize this “professional teacher”. Some tutors (I heard about it from my expat students and even saw it by my own eyes in some YouTube videos) start to represent Cyrillic characters and corresponding Russian sounds in the alphabet order. For me, the only explanation of this phenomenon is that those “teachers” have no idea how to teach Russian to foreigners. But. For example, you’ve got a professional teacher. And you’re listening to your first Russian sounds. А, О, У, Э, next, probably, И – and everything’s fine until now – but then – suddenly – Ы! A sweet smile escapes from your face. You’ve got a disgusting feeling that something is going wrong.

But in fact, there is quite an easy technic how one can get to Ы-sound. First you need to say [У] (a deep [У], or something more or less like “oo” in “moon” if we use English hints) and fix your tongue in that position. Then spread your lips like for И (or like for “ee” in “cheese” if we use English characters) – but don’t move your tongue, it’s strictly fixed for У! And that’s it. Ы-sound is done!

Listen to the basic Russian vowels: А, О, У, Э, И, Ы, and compare your pronunciation with the native one:

[Ш]-sound (like English “sh”) exists in many languages and that’s why it’s easy for the majority of foreigners. [Щ] is something specifically Russian. It’s hard to get how it’s different from [Щ].

How to say it?

In my experience, there are 2 the most effective hints to get to [Щ]-sound.

- We can proceed from “Ч”. [Ч]-sound (like English “ch” in “chair”) exists in many languages, and many foreigners can say it just naturally. But [Ч] is a “complex sound. If we use Cyrillic characters, we can describe it as [ТЩ]. If you pull a long [Ч], in the end you will hear only [Щ]. Try to pronounce “Ч” without the “T”-element. Does it sound different from [Ш] now?

If you try this technic but still pronounce a normal [Ш] and not [Щ], try the second hint:

Just make sure that this “i”-element is short enough (doesn’t form an additional syllable).

Theoretically, the difference between Й and И is that И is a vowel while Й is a consonant. But only this statement is not enough. People feel that Й doesn’t sound like a consonant.

If your ears and your intuitive phonetical understanding tells you that Й sounds like a vowel, let it be. But we TREAT it like a consonant in the system of the Russian language.

Why? What does it mean that Й is a consonant?  How is Й different from the “normal”  И vowel?

For example, from the point of view of the Russian grammar there is no difference between АНТОН and АНДРЕЙ – they both end in a consonant.

The soft sign is the most mysterious letter in the Russian alphabet. I’ve heard from some of my clients who had worked with other teachers before they found me, that those teachers don’t even try to explain the soft sign to foreigners.

I think it’s too much. The soft sign is something very special, that’s true. But if you learn Russian, you should know “ь” because it works to distinguish the words (meanings) in Russian.

There are 2 different situations where the soft sign is used:

1. “ь” between a consonant and a vowel,
2. “ь” after a consonant in the end of a word (or before another consonant).

When the letter “ь” is spelled BETWEEN A CONSONANT AND A VOWEL, it works TO SEPARATE a vowel from a consonant.

I guess you know that the letters  “я”, “ё”, “ю”, “е” mean 2 sounds if you read them separetely (as well as in the beginning of a word/ after another vowel):

As for the “ми” – “мьи” difference (the situations where the “ь” goes before “и”), the second syllable is pronounced with the [й]-sound in between:

Listen to the audio and compare the syllables:

Try to catch the difference! And try to imitate it.

And now let’s talk about the soft sign after a consonant in the end of a word (or before another consonant). This feature is the most difficult for foreigners, and many teachers don’t even try to explain it to their students and don’t know how to do it. But I always do.

The sotf sign in the end of a word is a “silent letter” that works to modify the previous consonant. It makes the consonant “soft”. What do we mean by “soft” when we talk about Russian phonetics? “Soft” means close to “i”. To get to a soft consonant you should pronounce the consonant thinking that you’re going to pronounce “i”, – your mouth is completely ready for “i”. Some foreigners even hear a kind of a little “i”-in-whisper in the end of a soft consonant. If it helps you, you can even treat “ь” like a little “i” – just make sure it’s short enough and doesn’t form an additional syllable.